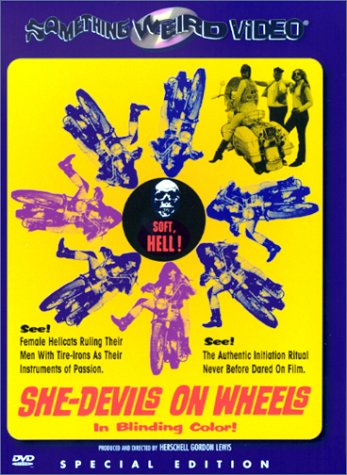 Brand : Image Entertainment
from USA
to Zimbabwe
in 5-8 days
At your doorstep by Jun 29  to Jul 02 with standard delivery

"Sex, guts, blood, and all men are muthers!" The all-girl motorcycle club the Man-Eaters is a swaggering, brutal bunch who like to be in the driver's seat. They race for first pick among the "stud line" that await them at their favorite watering hole, pound a rival hot-rod gang into the ground in a turf war (and then strip them for good measure), and drag a boy-toy behind their chopper until he's a raw, bleeding pile of hamburger. Why? Because one of their number likes him just a little too much. This wicked, weird, trashy piece of bargain-basement exploitation from gore king Herschell Gordon Lewis (Two Thousand Maniacs) leaves the details of the Man-Eaters' voracious sexual appetites offscreen but puts their bloody and bluntly violent reign of terror front and center, right down to a wild decapitation. After 10 years of filmmaking you'd think he'd develop a little style, but this is as poorly acted, clumsily edited, and utterly primitive as his earlier blood feasts. There's a cool twangy guitar score and a theme song ("Get Off the Road") that has since become a riot grrrl standard. With a little more polish it might pass as surreal, but this simultaneously campy and nihilistic slice of biker rebel hedonism is undeniably bizarre. The DVD also features commentary by Lewis, a funky short subject called Biker Beach Party from the swinging '60s, a gallery of exploitation art, and the original trailer. --Sean Axmaker
Show More
Reviews

She Devils On Wheels (Special Edition)